This bed is divided in half. One half is for the daylilies and the other half is for the irises. The beds are for propagation and selling to the public. Fundraising, special type of bed, display bed, educate community, beautify the community.

The iris bed dates back to the late 1980’s. It started with some iris donated by Emma and Barney Hobbs, two of HCMGA’s founding members, who were also iris hybridizers. The bed was located in front of the maintenance building on the grounds and was moved to the front of the Farm Bureau Co-op building on 10th Street in Noblesville where the gas station now stands in 1995. For years, the one day Iris-In-Bloom Sale in May was one of HCMGA’s biggest fund-raisers, giving the gardening public the opportunity to purchase iris dug on site.

The bed had to be moved in February, 1998, to make way for the gas station. They were placed in boxes with peat moss and air holes and kept in the horse arena area. They were planted a few months later in half of the area we now occupy. The daylilies joined them at this time because their former home was now becoming the new Exhibition Building/Extension Office at the fairgrounds. There were no sales of iris or daylilies in 1998. The fundraising shortfall made way for the rise of the Plant Sale which was held for the first time in 1999.

In 2001, water was added to our bed in the boondocks which made life a lot easier for the committee volunteers. But 2001 also brought about another move for our lovely flowers. It was decided that we needed a display bed for the daylilies and iris and a contest was held to come up with a winning plan. Pat McKay, who was also the daylily co-chair at the time, designed the plan for the raised beds you now see at our bed. Did I forget to mention that this display bed had been two separate committees up until this point – Daylily Committee and the Iris Committee?

In the fall of 2001, we dug up ALL the iris and moved them to Jeanette Daniel’s home and the daylilies went to Pete and Pat McKay’s for vacation.

The summer of 2002 brought about our dirt beach and the renovation of the bed. We tilled, we built the raised beds, we brought back ALL of the irises and daylilies and we combined the committee which doubled the size of our bed. Our sale was limited to donated iris in 2002.

The bed has been a work in progress since that time. We have brought in many new varieties of both iris and daylilies. Our sales have increased every year!!!

Then…….2005……the year of the borer! During the summer of 2005, EVERY iris rhizome (thousands) was dug up, labeled, divided, rinsed, trimmed, bleached, dried, sorted, and lovingly planted again in a newly tilled bed. What a lot of work but the results have been phenomenal!

In the summer of 2009, the daylily display area was removed and additional varieties were planted in sale rows like the back half (west half – closest to the tree line).

In the summer of 2011, the iris display area was removed and additional varieties were planted in sale rows like the back half (west half – closest to the tree line).

Both the daylily and iris are organized by color/name and have made the sales easier to work and more profitable. Not to mention a BEAUTIFUL sight!!!

We continue to get new beautiful plants to sell and have record breaking sales year after year. This is all made possible by our WONDERFUL volunteers!! Please stroll through our peaceful garden and enjoy the iris in May, the daylilies in June and July, and the birds’ songs all year round!

In 2014 and 2016, we scheduled a “Play in the Dirt” day in the daylily Iris bed. This was an event that was open to the public to provide instructions how to dig up, divide, and replant your daylilies and irises. Members of this committee served as the instructors to the public that attended. 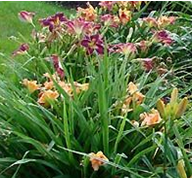