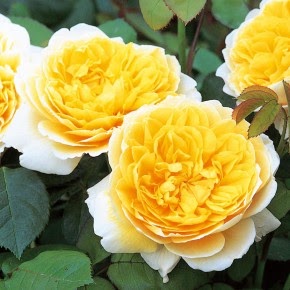 David Austin (English Roses):  David Austin was a British rose breeder and writer who lived in Shropshire, England. His emphasis was on breeding roses with the character and fragrance of old garden roses (such as gallicas, damasks and alba roses) but with the repeat-flowering ability and wide color range of modern roses such as hybrid teas and floribundas. Though Austin’s roses are not officially recognized as a separate class of roses, they are nonetheless commonly referred to by rosarians, at nurseries, and in horticultural literature as ‘English Roses’. For almost 60 years David Austin has been breeding exquisite English Roses and in 2010, he was named a “Great Rosarian of the World”.