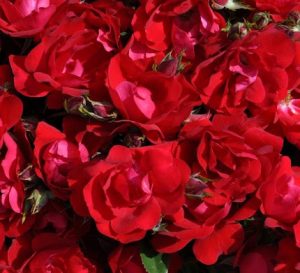 Modern Roses are those varieties bred after 1867. Unlike Old Garden Roses which bloom once a year, Modern Roses bloom continuously. They also have a larger bloom size and longer vase life but lack fragrance. They are also somewhat less hardy and disease resistant. The following listed below are classifications we have included in our Rose Garden.

Climbing Roses: To call a rose a “climber” is somewhat misleading, as these plants do not have tendrils or suckers that instinctively seek to cling to a trellis or wall. More appropriately, they are best described as very tall roses with extra long canes that can easily be secured to a trellis or other structure. While the thorny canes can hook themselves onto vertical supports, you generally need to tie the canes up the way you want. Climbing roses only bloom on one year old or older canes, so prune cautiously.

Hybrid Tea Roses: The favorite rose for much of the history of modern roses, hybrid teas were initially created by hybridizing hybrid perpetuals with tea roses in the late 19th century. ‘La France’, created in 1867 by a French Nurseyman, is universally acknowledged as the first indication of a new class of roses. It is the oldest group classified as a modern garden rose. Hybrid Teas are one of the most recognized and popular cut flowers. The cultivar that made hybrid teas the most popular class of garden rose of the 20th century was the rose ‘Peace’ introduced at the end of World War II. Hybrid Teas are known for their long-stemmed elegance and high-centered blooms. Their upright canes are more open than bushy and carry large flowers. This rose has an extensive colorful palette that allows for its vibrancy to be seen in the garden from a distance.

Miniature and Miniflora Roses: Most miniature roses have smaller flowers (less than 2 inches across) than standard rose bushes, but they come in the same variety of types and colors as their larger counterparts. Despite their petite size, 10 to 24 inches, miniature roses are extremely hardy. In fact, because they are propagated on their own roots (and not grafted onto the rootstock), they are more winter-hardy than most roses and tend to be profuse repeat bloomers. Miniature roses grow moderately quickly and work well in a border or as garden edging. They’re also especially nice as specimen plants in containers, where they can be brought closer to eye level and truly be seen and appreciated.

Minifloras are a new kid in the rose garden as this classification was created by the American Rose Society in 1999. The miniflora class was developed for those rose bushes that grow too large in bush or bloom size to be classified as miniatures. The average miniflora rose bush size is 2 ½ to 4 ½ feet tall and can be within that range for plant width as well. The roses tend to be 2 ½ to 3 inches across offering hybrid tea-style and quick repeat bloom.

Our Shrub Roses Include:

David Austin (English Roses): David Austin was a British rose breeder and writer who lived in Shropshire, England. His emphasis was on breeding roses with the character and fragrance of old garden roses (such as gallicas, damasks and alba roses) but with the repeat-flowering ability and wide color range of modern roses such as hybrid teas and floribundas. Though Austin’s roses are not officially recognized as a separate class of roses, they are nonetheless commonly referred to by rosarians, at nurseries, and in horticultural literature as ‘English Roses’. For almost 60 years David Austin has been breeding exquisite English Roses and in 2010, he was named a “Great Rosarian of the World”.

Dr. Griffith Buck Roses: Griffith J. Buck was an American professor and a horticulturist. He taught horticulture at Iowa State University and he created over 80 named cultivars of the rose, all of which are capable of withstanding temperatures of -20 °F and need no pesticides or fungicides to thrive. Griffith Buck Roses were first bred around 1947 when he started combining strains of very cold hardy roses with modern hybrid teas and other roses. To ensure he bred winter-hardy plants, he tested them in harsh Iowa winters of 20-30 degrees below zero with absolutely no protection. The survivors would be the seedlings he chose to introduce. Griffith Buck Roses are very disease resistant roses and have been tested in Iowa’s hot humid summers and cold winters.

Drift® Roses: Drift® Roses are a cross between full-size groundcover roses and miniature roses. From the former, they kept toughness, disease resistance and winter hardiness. From the miniatures, they inherited their well-managed size and repeat-blooming nature. The low, manageable habit of Drift® Roses makes them perfect for gardens small to large, for planters, and for mass commercial plantings. They brighten up borders, fill in empty spaces, meander around established plants, and can control erosion on hillsides and slopes.

Easy Elegance: Bailey Nurseries, based in St. Paul, Minnesota, developed the series of roses known as Easy Elegance in 2008. They developed the plants to be easy to care for while still producing beautiful flowers. They are disease and insect resistant, cold-hardy, and durable. Easy Elegance Roses bloom all season long. They are own root roses, adding to their hardy nature. An excellent choice for beginning gardeners, these roses are as close to plant it and forget as possible.

Earth-Kind® Roses: Earth-Kind is a special designation given to select rose cultivars by the Texas AgriLife Extension Service through the Earth-Kind landscaping program since 1977. It is based on the results of extensive research and field trials and is awarded only to those roses demonstrating superior pest tolerance, combined with outstanding landscape performance.

Floribunda Roses: Floribunda roses offer a bouquet on every branch. The small flowers look like elegant hybrid tea blooms but appear in clusters instead of one flower per stem. Floribunda is a modern group of garden roses that was developed by crossing hybrid teas with polyantha roses combining hardiness, free flowering, and showy, usually fragrant blooms. The idea was to create roses that bloomed with the polyantha profusion, but with hybrid tea floral beauty and color range.

Kordes Roses: Kordes roses come from Germany. This rose type’s origin roots date back to 1887 when Wilhelm Kordes founded a nursery for the production of rose plants in a small town near Hamburg, Germany. The business did very well and was moved to Sparrieshoop, Germany in 1918 where it is still in operation to this day. At one time, the company had a peak production of over 4 million roses a year, which made them one of the top rose nurseries in Europe. The Kordes rose breeding program is still one of the largest in the world. Each rose plant selected from many seedlings each year must go through a seven year trial before being released for sale to the general public. These roses are exceptionally hardy. The top goals of the Kordes rose breeding program are winter hardiness, quick repeat blooms, fungal disease resistance, unique colors and forms of bloom, abundance of blooms, fragrance, self-cleaning, good height and fullness of plant and rain resistance.

Knock Out® Roses: Rosa ‘Knock Out’, is a shrub rose cultivar bred by American rose grower, William Radler in 1989, and introduced into the United States in 2000. Knock out is a compact shrub rose that typically grows to 3-4′ tall and as wide. It is best noted for its ability to bloom in as little as 3 hours per day of direct sun with excellent disease resistance and are heat and drought tolerant. Knockouts are easy to grow and don’t require a lot of care.

Locate the Rose Garden on the map of the fairgrounds