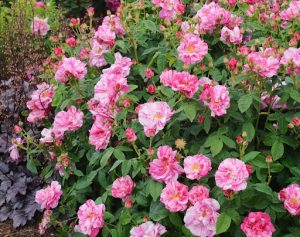 The Old Garden Rose is defined as any rose that existed before 1867. Old Garden Roses bloom heavily in the Spring on wood from the previous year and typically only blooms once per year. They can grow over 20 feet tall. The following are a few of the classifications of Old Garden Roses we have in the Garden:

The flowers are renowned for their fine fragrance, and are commercially harvested for rose oil used in perfumery and to make rose water. The flower petals are also edible. They may be used to flavor food, as a garnish or herbal tea. The Damask rose is a deciduous shrub growing to 7 to 10 ft tall. The stems are densely armed with stout, curved prickles and stiff bristles. The roses are a light to moderate pink to light red. The relatively small flowers grow in groups. The bush has an informal shape. The Damask is considered an important type of Old Rose, and also important for its prominent place in the pedigree of many other types. The French Crusader Robert de Brie, who took part in the Siege of Damascus in 1148 at the second crusade, is sometimes credited for bringing the Damask rose from Syria to Europe. The name of the rose refers to the city of Damascus in Syria.

The Bourbon rose first appeared in the 1800s on the Isle of Bourbon (now Reunion) in the Indian Ocean. Bourbons bear large, full blooms that have a very heavy fragrance. They are extremely vigorous, producing shrubs that are big, wide, and very adaptable for training as pillar roses or on a fence.

Rosa gallica, French rose, is a species in the rose family native to southern and central Europe eastwards to Turkey. It was one of the first species of rose to be cultivated in central Europe. The Gallicas are probably the oldest of all garden roses. They were grown by the Greeks and Romans. In the 17th century the Dutch started to breed new varieties, and later the French continued their development on a very large scale. Among them are some very fine roses with magnificent mixtures of color – particularly among the crimson, purple and mauve shades – and they have a beautiful flower formation. They form short bushy shrubs, many of which are quite suitable for small gardens.

This old garden rose was born in Charleston, South Carolina and named for Philippe Noisette, a French nurseryman of the area in the early 1800s. The blooms resulted from crosses made by Southern landowner, John Champneys, between the ancient pink Chinese rose, Old Blush, and the centuries old cluster flowered European musk rose. Since that successful union, Noisette roses have been delighting gardeners for around 200 years with their easy, graceful, and fragrant flowers. Their shapely yet soft petals come in shades of cream, pink, yellow, apricot, and white. These large, healthy, and amazingly adaptable plants thrive in the warmth and soils of most Southern gardens.

Locate the Rose Garden on the map of the fairgrounds